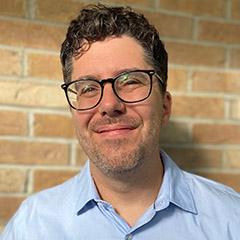 Dr. Brian Moritz is an associate professor in the Jandoli School of Communications, director of the online MA programs in digital journalism and sports journalism, and a 1999 St. Bonaventure graduate.

He’s an internationally recognized sports media scholar and researcher whose work examines the societal, organizational, and economic models of digital journalism, with a particular focus on sports journalism. His research has been published in Communication & Sport and the International Journal of Communication & Sport, as well as in several collected anthologies, and he is a frequent presenter at national and international conferences. In 2020-21, he served as chair of the Sports Communication Interest Group with the Association for Education in Journalism & Mass Communication (AEJMC). He is also the author of the Sports Media Guy website, a contributor to the Nieman Lab’s annual prediction package, and host of the writing podcast The Other 51.

Moritz received his Ph.D. in mass communication from the S.I. Newhouse School of Public Communication at Syracuse University in 2014, and he received his master’s in media studies from the Newhouse School in 2011. Before returning to St. Bonaventure, he spent seven years as assistant/associate professor of digital media production and online journalism at SUNY Oswego.

Dr. Moritz lives in Fairport with his wife, their daughter, two crazy dogs, and an indifferent cat.

St. Bonaventure University is ranked by the U.S. News & World Report as one of the Top 5 Best Value Schools in the North.