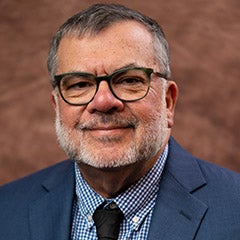 Dr. Richard A. Lee is a professor in the Jandoli School of Communication who has worked in journalism, government, and academia throughout a career spanning more than 40 years.

In 2011, Lee returned to his alma mater, St. Bonaventure University, as a professor in the Jandoli School of Communication. He has taught numerous journalism, strategic communication, and integrated marketing communication (IMC) courses. Lee served as director of the graduate IMC program from 2014 to 2018 when he stepped down to devote more time to media research.

Lee and Anne speak regularly at academic conferences devoted to journalism, communication, and pop culture. They often work with students on research and bring them to conferences, so they can participate in presentations. In April 2021, a research project conducted by students in Lee’s Media and Democracy class was featured on CNN and C-SPAN.

As a journalist, Lee held a variety of jobs ranging from political reporter to rock music critic. He worked at daily and weekly newspapers as well as an entertainment news magazine, and his freelance articles appeared in a variety of publications, including The New York Times. While working as State House Correspondent for The News Tribune of Woodbridge, he was awarded first place in the New Jersey Press Association’s 1987 Better News Contest in the Interpretive Writing Category.

In government, Lee held communications positions at the Mayor’s Office in Woodbridge, N.J., the New Jersey General Assembly, and the Office of the Governor in New Jersey. He also taught public relations and media and government classes in adjunct roles at Mercer County Community College and Rutgers University.

Lee and his wife live in Olean, N.Y. They have two grown daughters, Meredith and Jessi.

St. Bonaventure University is ranked by the U.S. News & World Report as one of the Top 5 Best Value Schools in the North.